Blewbury Brass Band is currently preparing for its annual winter concert, this year with a ‘Party Night!’ theme. The concert, to be held in Chilton Village Hall at 7:30pm on Saturday 18th November, promises to be a real treat featuring our Main Band of over thirty players, our impressive Learner Band and our senior players from Blewbury Youth Brass. The concert will include pop tunes, a march, solo and section features, and a Christmas tune with a twist.

Musical Director, Ian Barlow, said, ‘The band has been working hard on new pieces for the concert. We are including old favourites such as Manilow Magic and Macarthur Park as well as playing some more traditional brass band music, with every piece cleverly linked to the theme. We will be featuring our trombone section and soloist, Grace Hancock, playing ‘Feeling Good’’.

The concert will feature ‘Mr Sandman’, played by a group from our highly acclaimed Blewbury Youth Brass. The band has recently toured Germany and, on 8th October, won four prizes in the Oxfordshire and District Brass Band Association’s Entertainment Contest. Youth Brass Musical Director, Judith Atkins, said, ‘We are very proud of the band and delighted by its recent success. The band is made up of some of the finest young players in the county and it is a privilege to work with then. Mr Sandman will be a treat for the audience’.

The Learner Band, which has over twenty-five players aged from nine to sixteen, will also be taking part. Highlights of their programme include ‘Alfie’, played as a flugel solo, and the popular march ‘Westward Ho!’.

Wine, soft drinks and party nibbles will be available during the interval. Tickets are available now from band members or can be purchased on the door priced £8 (adults), £6 (seniors) and £1 (children).

The concert marks the start of a busy Christmas period for the band. You can see us carolling at local supermarkets and we are also supporting several charitable events in the local area. The Main Band will also be taking part in the Blewbury Village Concert at St Michael and All Angels Church, Blewbury on Wednesday 20th December at 8pm and Carols on the Blewbury Playclose on Christmas eve. 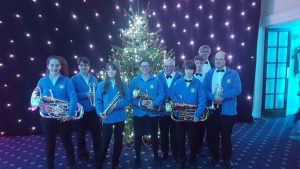